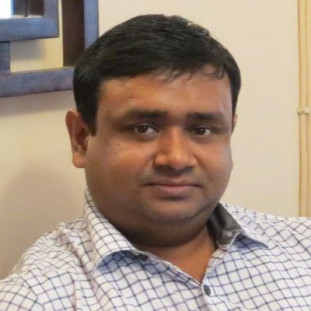 Sunny Peter is a writer and independent journalist. He writes on international affairs, diplomacy, terrorism, ethnicity, social integration, religion and culture which have appeared in several international publications. To know more, visit his website www.sunnypeter.com.

According to a Ukraine, 13 Russian warships are currently deployed in the Black Sea, among them a submarine missile carrier armed with Kalibr cruise missiles.

China Develops A Tool To Defend Military Facilities In South China Sea, And It's Mind-Blowingly Simple

Radar reflectors can be used to confuse incoming radar-guided missiles or aircraft.

Once Beleaguered Ukraine Has Now Taken The War Deep Inside Russia

Ten months into the conflict, Ukraine has found ways to adapt Soviet-era drones to carry out longer-range strikes inside Russia.

The new class of vessel, which also appeared to have a stealth-influenced design, is reportedly smaller than its Shahid Soleimani-class missile corvette.

The U.S. had also raised concerns that Moscow could resort to using chemical weapons in Ukraine if Russian troops continue to lose ground.

Moscow has assembled nearly two dozen of its Tu-95 and Tu-160 long-range strategic bombers along with missiles and other military hardware.

An "unequipped" missile with its own kinetic energy and fuel residues poses a significant threat due to its ability to cause indiscriminate damage.

The Pentagon report conforms with statements made by top U.S. military officials.

China, Russia Keep Up Pressure On US Allies; Fly Warplanes Into Sea Of Japan

The Russian defense ministry confirmed the warplanes conducted joint patrols over the Sea of Japan and the East China Sea on Wednesday.

The Canadian air and maritime forces in the region are part of the multinational efforts to monitor and enforce international sanctions on North Korea.

Type 075 is the largest amphibious assault ship in service with the PLA Navy with a massive capacity to carry both men and equipment.

His lawyer argued that Duggan, now an Australian citizen, would be eligible for release if the U.S. does not ask for his extradition within the timeframe.

Diversion of the existing stock of munitions to Ukraine and pandemic-related supply-chain issues have created a sizeable backlog in weapon deliveries to Taiwan.

The new Russian Ambassador to China emphasized that the relationship between the two countries was unbreakable and could overcome any challenge.

France already ranks second in top weapons suppliers to India after Russia, but the French defense industry is reportedly ill-equipped to keep up with India's growing demands.

Preparing For Drone Era Of Warfare, US Tests Its Newest Drone Killer System

The proliferation of the technology has led to a growing risk of non-state actors using cheap drones for carrying out terror attacks.

Amid Rising Tension With China, US Military May Return To Subic Bay, Philippines

The Philippines is a key ally of the U.S. in a region with close geographical proximity to China, across the South China Sea.

Urging Beijing to refrain from "destabilizing actions" in Taiwan, the defense secretary asserted that the U.S. will operate wherever international law allows.

Poland's decision to deploy air defense comes amid heightened fears of the war spilling beyond the borders of Ukraine, triggering direct NATO involvement.

US Says China Has Deployed Long-Range ICBMs On Nuclear Submarines

China has been working on upgrading its Type 094 (Jin-class) submarines, allowing them to carry the more powerful and longer-range JL-3 ballistic missiles.

Beijing denied there was a forcible seizure and said the debris was handed over by Philippine forces after "friendly negotiations."

The Davidson Window: US Navy Sailing Through Nightmarish Period As China Eyes Taiwan

The U.S. Navy may be losing its strategic advantage over China soon enough as it takes several years to build and deploy new warships.

Talks Are 'Strategic Mistakes' That Will Give Putin Time To Create 'Giant Ticking Bomb': Ukraine

Stressing the need for partners to continue supporting Kyiv, the Ukrainian foreign minister said, "What will bring real peace is the Ukrainian victory."

The report says the 27-year-old Russian soldier expressed his opposition to the war and was demoted from his rank.

Israel Caves In To US Pressure, Agrees To Provide 'Strategic Materials' To Ukraine

Oil settled lower for a fifth straight session on Thursday on the prospect of a major crude pipeline resuming service, which would return a hefty amount of crude to the market at a time when global economic slowdowns are raising fuel demand fears.

When Russian forces advanced in the middle of last winter, the villagers of Posad-Pokrovske began to flee, joining compatriots from across the southern Ukrainian province of Kherson in a mass westward exodus.

New York City Mayor Eric Adams on Thursday unveiled a plan to boost its housing supply by 500,000 dwellings over the next decade by easing regulations for home builders and cutting construction time in half.

Miami Circuit Judge Laura Shearon Cruz denied Courtney Clenney's request to be released on bond ahead of trial. Clenney has pleaded not guilty to second-degree murder charges in killing her boyfriend, Christian Obumseli, a cryptocurrency trader, fatally stabbed on April 3.

When Spencer returns from Pentonville, Nikolas must figure out how to cover up Esme's pregnancy on "General Hospital."

Over 110 Christmas TV Episodes On Peacock