The Dolphins and Raiders are in position to pull off upsets and win against the spread in NFL Week 13.

With all the hype behind Victor Wembanyama, it's easy to look past someone of the same mold who's already making an impact in the NBA

US, Iran Face Off In Winner-takes-all World Cup Showdown

US, Iran face off in winner-takes-all World Cup showdown 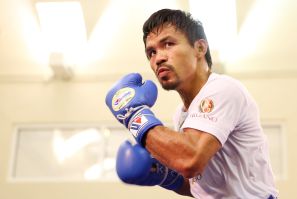 The Lions, Cowboys and Vikings host games with playoff implications on Thanksgiving 2022.

Panthers Coach Going With Darnold Over Mayfield In Next Assignment

The San Diego Padres are reportedly one of the teams who may make a move to enlist Xander Bogaerts.

Mets Could Replace deGrom With Verlander

The Draymond Green-Jordan Poole punching incident has died down, but the circumstances behind that may be hurting the Warriors' campaign.

Kyrie Irving is unlikely to change his ways instantly, raising concerns about whether the Brooklyn Nets can thrive with him.

Patrick Williams Reveals Why His Play Improved This Season