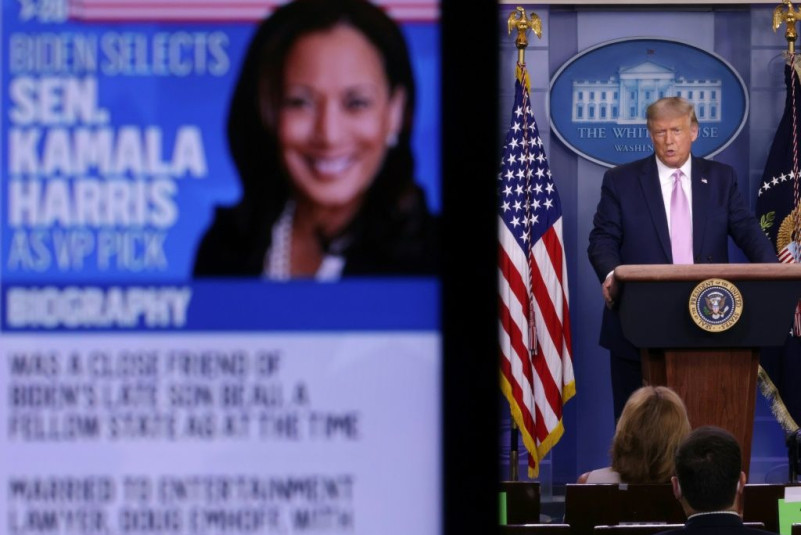 Kamala Harris harshly criticized President Trump on Wednesday in her first debut as Joe Biden's running mate, saying he is "a president who is making every challenge we face even more difficult to solve.”

Six Nations Round 1 - What We Learned

Six Nations round 1 - what we learned

International Flavors & Fragrances (IFF) announced it is taking over DuPont’s Nutrition & Biosciences (N&B) on a $26.2 billion deal to create a new consumer giant worth $45 billion-plus.

Wall Street stocks ended lower on Friday, capping a day of heavy trading with investors mostly pulling back from initial concerns over an escalating trade dispute between the United States and China.

Trump plans to cut the corporate tax rate to 15 percent from 35, but a substantial portion of profitable Fortune 500 companies don't pay much to begin with, according to a new report.

The German drugmaker made its offer for the Missouri agribusiness May 10 and announced details of the all-cash deal Monday.

The German drugmaker and the U.S. agrichemicals firm both independently confirmed speculation about a deal but did not provide any details of the offer.

The chemicals and seed producer said its global cost savings and restructuring plan was on track and still expects savings of $730 million this year.

The state-owned Chinese company is near to acquiring the Swiss seeds and pesticides group for around $42 billion.

The chemicals and seed producer is intensifying its cost cutting in advance of a planned merger with Dow Chemical.

DuPont Cutting 1,700 Jobs In Delaware Ahead Of Dow Merger

The chemical giant said Tuesday that the layoffs are part of its plan to pare operations before a planned merger with Dow Chemical.

US Economy 2015: Dow-Dupont Merger Could Have Large Impact In Michigan, Experts Say

The marriage between the Michigan-based Dow Chemical Co. and the Delaware-based DuPont Co. could mean factory closures.

Huge Dow Chemical, DuPont Merger Isn’t Even Close To The Largest Deal Of 2015

Global mergers and acquisitions activity topped $4.75 trillion this year, with more than 37,000 deals announced so far.

The combined company, to be named DowDuPont, will eventually be split into three independent, publicly traded companies.

Obama In Kenya: $1.5 Million Limousine 'The Beast' To Protect President From Al-Shabab

Kevlar inventor Stephanie L. Kowlek said she was surprised when the polymer she invented saved thousands of lives.

CEO Median Pay Crosses $10M: How Much Do CEOs Make And Who Are The Highest-Paid Female CEOs?

The average CEO pay package was higher than $10 million in 2013. Here's a look at who makes the big bucks (not the average worker).

As the EPA considers whether to reduce ethanol blend requirements, biofuel supporters say doing so would raise gas prices and carbon emissions.

Opponents of the law have raised $22 million, while supporters have collected a paltry $7 million.

To battle growing criticisms about GMOs, a group of biotech companies including Monsanto and DuPont have launched a new website, GMO Answers.

'Supertasters' May Be Thinner, But Also Less Likely To Eat Their Vegetables

Most of the Asian markets declined Wednesday as sentiment deteriorated following the weak earnings reports and the downgrade on five of the Spanish regions by Moody’s.

Dow Chemical Co (DOW.N), the largest U.S. chemical firm, announced Tuesday it plans to cut 5 percent of its workforce and shutter 20 plants as part of a restructuring program amid a slowing global economy.

U.S. chemical giant DuPont cites a slowdown in Asia, a decline in electronics and a widely used chemical as a reason for the cuts.
About DuPont

DuPont is what it calls a "science-based" products and services company.