The tidal bulge would extend the equator of the star from the core, dimming the overall appearance of Betelgeuse.

Scientists Find Chemical Traces Of One Of Universe's First Stars

A team of scientists found an unusual combination of chemical traces in the distant quasar.

Studying the lobes opens opportunities to understand the medium and the recurring activity of the supermassive black holes that create it.

2 Black Holes Might Ram Into Each Other Within 3 Years

Scientists suggest that it may be one of the most highly anticipated events in modern astronomy.

NASA Captured The Sounds Of A Black Hole And It's Terrifying

This is not the first time that NASA shared creepy sounds from the far depths in space.

In a video posted by SXS Collaboration, NASA explains what happens when two black holes collide in space.

Japan's VERA project has presented a new map that offers a better estimate of the distance of Earth to the supermassive black hole at the center of the Milky Way.

An artistic imagination showed how death by spaghettification happens to stars when they get hauled by the extreme gravitational pull coming from black holes.

A new study adds to the body of evidence that Albert Einstein's Theory of Relativity matches the modern-day findings in quantum physics.

The discovery of GW190412 is said to be the first ever observation of an unequal-mass black hole merger.

The bigger black hole part of the merger is so massive -- 85 times the mass of the sun -- that scientists say it shouldn't even exist based on the current understanding of stellar explosions.

Whether the events produce accretion disks has been a matter of debate among scientists but scientists now found solid evidence of disk formation.

A microquasar and a gas cloud are 'beating' to the same rhythm even if they are 100 lightyears apart.

Scientists have identified a group of stars that are closely orbiting the Milky Way galaxy's supermassive black hole.

What Happens To A Galaxy Cluster Unbothered By Black Hole

Without interference from a black hole, galaxy cluster SpARCS1049 is forming stars at an extraordinary rate.

Astronomers Spot Signs Of Elusive Neutron Star In Supernova 1987A

The authors of a new study found evidence to support the suggestion that the neutron star in SN 1987A may be hiding in a 'hot blob' of dust. 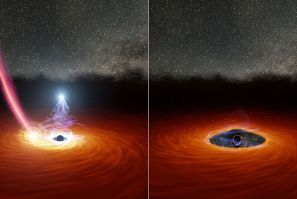 It was the first time for astronomers to observe a black hole's corona disappear in less than a year and then reappear again. 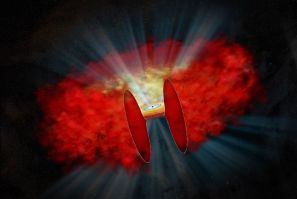 The 'heavily obscured black holes' were previously misidentified as being other celestial objects. 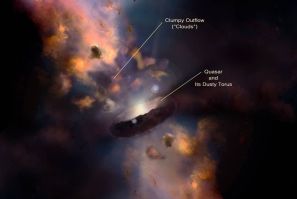 A supermassive black hole is the largest kind of black hole and can be millions to billions of times the mass of the Sun. 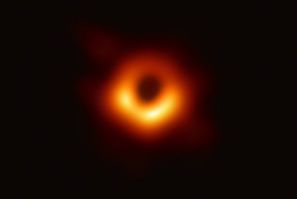 New measurements taken on one of the largest known black holes in the universe revealed how much it eats every day. 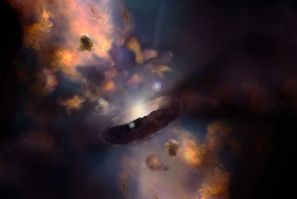 If the black hole at the center of the Milky Way wanted to grow as big as J2157, it would have to consume two thirds of the stars in the galaxy. 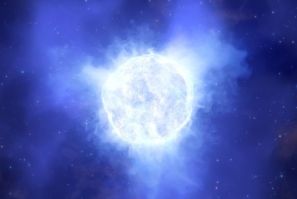 Unstable Massive Star Vanishes; Did It Become A Black Hole?

The sudden disappearance of a star millions of times brighter than the Sun has baffled scientists. It is possible that the stellar object suddenly died and turned into a black hole. 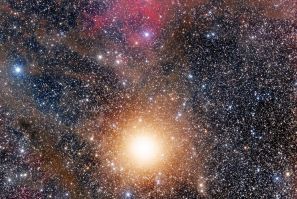 Betelgeuse Dimming Because Of Massive Star Spots, Not Dust: Study

Betelgeuse is a red giant in the constellation Orion that is considered as one of the brightest stars in the sky.
Latest news
Experiment Reveals How Energy Can Be Extracted From Black Holes
Black Hole's Merger With Mysterious Object Stuns Scientists
NASA Spots Thousands Of Black Holes Near Milky Way’s Center
Scientists Give Update On First Confirmed Heartbeat Of Supermassive Black Hole
Astronomers Film Black Hole Shooting Out Powerful Jets [WATCH]
EDITOR'S PICK