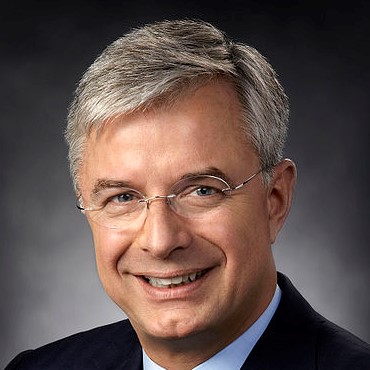 Hubert Joly is the former chairman and chief executive officer of Best Buy Co., Inc., where he led the company's turnaround and transformed it into an industry leader, consistently rated one of the best places to work. He is now a senior lecturer at the Harvard Business School.

He is also a member of the board of directors of Johnson & Johnson and Ralph Lauren Corporation, and a vice chairman of the Business Council. He has endowed the Joly Family chair in Purposeful Leadership at HEC Paris, where he actively collaborates with the faculty.

Prior to Best Buy, he was the CEO of Carlson Companies, a global leader in the hospitality and travel industry, a senior executive at Vivendi S.A., the president of EDS France and a partner at McKinsey & Company. He is a graduate of HEC Paris and Institut d'Etudes Politiques de Paris.

Hubert Joly’s record at Best Buy would make any business leader proud, but it’s what he did for his employees and his customers, and his ideas about how business can and should give everyone access to the prosperity, possibilities, and experience of a successful life that made us happily include him in this month’s list.

Taking the reins as CEO in 2012, he initiated a “Renew Blue” transformation (a reference to the color of the shirts worn by sales associates), bringing the company back from its spiral of declining revenue and profitability, and causing the stock to triple in 2013, and he did it without laying off employees but instead investing in them.

Hubert immediately tapped the employees for suggestions on how to improve the inventory search engine, he reinstated employee discounts, and he retrained employees to become experts in new tech such as virtual reality. Hubert’s cost-cutting reforms hit the company’s SG&A (selling, general and administrative) expenses first as he doubled down on delivering on Best Buy’s customer promise — provide a low-price guarantee, the latest and greatest devices and services in one place, impartial and knowledgeable advice, the ability for customers to shop when and where they want and have support for the life of the product.

“If you can connect the search for meaning of the individual with the purpose of the company, then magical things happen," explains Hubert. He believes in what he calls “human magic”: mobilizing people to give their best effort and having that, then, translate into extraordinary performance. So, the first concern of a business leader is how the people in the organization are doing. Checking on how the clients are being served comes next. Lastly in this hierarchy are the financials. In Hubert’s view, “If you start with finances, you’ll never get to people and clients, and at the end of the day, it’s those two things that truly drive the business.”

One of Hubert’s central beliefs turns traditional Capitalism on its head: The purpose of a business isn’t to generate revenue or increase the bottom line but rather to make people’s lives better. And he believes in organizations using that platform to make the world a better place for people to live in. This was, in fact, part of his successful turnaround strategy at Best Buy: He insisted management help create meaning for the employees and actually literally listen to their dreams rather than treating them as costs to be minimized. He recounts seeing one of his managers put this into play: "I watched the head of [this store] ask his employees what their dreams were. One said he wanted to buy a house for his family. The manager told him that they would work together to help him develop his skills, move up in the company, and make his dream a reality."

And there you have that Social Capital commitment — in this case to “access” a better and more fulfilling life.

He stepped down as CEO in 2019 to become Executive Chairman then left the company completely in 2020, although he is still an advisor to the current CEO and board of directors. Now, as a Senior Lecturer of Business Administration at the Harvard Business School, he is helping inspire the next generation of business leaders with a new, better view of business and Capitalism founded on purpose and humanity -- the Social Capital philosophy we love so much!

Hubert’s upcoming book, due out this spring, The Heart of Business—Leadership Principles for the Next Era of Capitalism, highlights his belief that the heart of successful business lies in pursuing a noble purpose, putting people at the center, embracing all stakeholders, and treating profit as an outcome. And for Hubert, that is far from a lofty philosophical argument, as he uses multiple vivid and concrete stories from the remarkable resurgence he led for Best Buy to illustrate his leadership principles. A central theme of Hubert’s that we really love is his belief in every single human being’s right to be treated fairly and to have “access” to the experience of human worth.

His experience as a leader couples that belief with a view of work as a good thing and a way for us to do good in the world. The role of business, then, not only can be but needs to be as a force for good.

“When 88% of the people who have jobs feel like they work for an organization that does not care for them, they do not feel valued,” explains Hubert. “They feel used for someone else’s gain. In business, in politics, in our neighborhoods and communities, so often people are not treated with the dignity and respect they deserve. In turn, it is difficult for those who do not feel cared for to care for others.”

Hubert was elected a Global Leader for Tomorrow by the World Economic Forum, twice named one of the 25 Most Influential Executives of the Business Travel Industry by Business Travel News magazine, voted to the top 10 on Glassdoor’s 2018 Top 100 Highest Rated CEOs and that same year named one of the "Best CEOs In The World" by the CEOWORLD magazine, one of the "World's Best CEOs" by Barron's, and one of the "Best-Performing CEOs in the World" by Harvard Business Review. He is a Knight in the French National Order of Merit and was awarded the French National Order of the Legion of Honour, France’s highest honor for civil merit. To this distinguished record, we are pleased to honor him this month as one of our Social Capital CEOs enabling access to a better life for employees and customers.

Antidote To The Great Resignation: Finding And Putting Meaning In Work

Adapted from "The Heart of Business," leadership principles for the next era of capitalism.

Hubert Joly, who led the turnaround of Best Buy when most in business thought it a lost cause, argues eloquently that the best business leadership is about improving the lives of people.

The Heart of Business: Leadership Principles for the Next Era of Capitalism