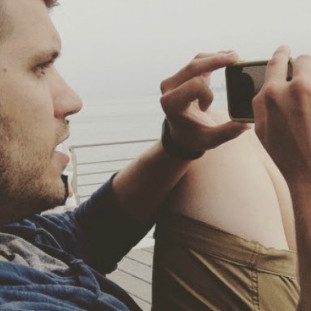 Ethan Lascity joined IBT in June 2015 following other stints in the media and academia. He's currently trying to make shopping a career.

The Empire State Building will be lit up with endangered animals in its first-ever projection display. The show will be in support of an upcoming documentary, "Racing Extinction."

Cursing Maps Show Who Has The Dirtiest Mouths In The US

Forensic linguistic research uses Twitter data to see which regions of the country use which specific swear words.

Skin Orgasms: Music, Songs That Chill, Thrill And Excite Us

There's a term for the chills we get from listening to powerful songs: skin orgasm. A Wesleyan University researcher discusses which songs fit the bill.

Shelter officials found a badger passed out on the beach after chugging seven beers. But she's hardly the first animal to hit the bottle a little too hard.

Some Chechen women and others have reportedly faked interest in joining ISIS -- just long enough to get the perks.

Feline Curfew: Australia Wants To Lock Up Killer Cats To Save Endangered Wildlife

The aging Nabire has died in the Czech Republic, leaving only four of the nearly extinct species on the globe. Poaching decimated the white rhino population in the 1970s.

Following copyright law, there are some Christmas classics you can't perform without permission.

Take Your Awkward First Date To The Next Level With Peekawoo, Grouvly Apps That Promote Group, Chaperoned Meet-Ups

Asia's Peekawoo and Grouvly appeal to those who would prefer a group or chaperoned meet-up.

Time To Celebrate? 'Happy Birthday To You' Might Be Free For All

The rules were simple: Locate every game made for the Nintendo Entertainment System within 30 days -- without help from the Internet.

An angry cyclist spots a car parked in the bike lane. Then he jumps into action by dragging the car out of the way.

Ever wonder which polo shirt is right for your body? Wonder no more: Someone has figured it out.

Authorities in the African country are looking for the suspect or suspects who killed the animal earlier this month.

In China, a mother was able to push her 2-year-old son to safety before being killed in an escalator mishap that was caught on video.

In EXP, a new American K-pop band, the singers aren't Korean -- and they don't even speak Korean.

Kelly Clarkson has been making a splash with her cover songs lately. During her latest tour, she's covered Taylor Swift, *N Sync and Rihanna.

Siblings in Florida pull an injured hammerhead to shore and free it from fishhooks -- just days after a pro surfer fends off a shark in South Africa.

Writers from Salon attacked Gawker's culture of snark. And after a response from Gawker, the Twitter battle seems to be heating up.

Political News Click-Bait: This 7-Minute Video Will Open Your Eyes

A new video suggests that social media click-bait can change your political leanings. Research, however, suggests it's not that simple.

Wyatt Cenac recently said he and Jon Stewart clashed over a racial skit. We look back at some of Stewart's recent takes on race.

The ZTE Axon is the first smartphone to use antimicrobial glass with the intention of killing germs and other gross things on the screen.

Video Debunks Chemicals In Food Concerns As Campbell's, Other Brands Aim For Transparency

Campbell's has launched a website to explain what's in its soup. Meanwhile, a video says chemicals in food might not be as harmful as feared.

'Close Up Baltimore' Shows Human Side Of Charm City

"Close Up Baltimore," a photo project and social media feed, could become a "Humans of New York" for Charm City.

American Eagle Starts Holiday Promotional Push In The Middle of Summer, Proves It's Never Too Early

New York has just come off a heat wave, and what better way to cool off than to think about the deep freeze of winter?

A new study found that fewer than half of the world's cultures kiss romantically. Guess where the highest and lowest kissing concentrations are?

John Green is an author, YouTube star and teen icon, and he uses his popularity to speak out in defense and support of teens.