Adam Lidgett is a Breaking News Reporter covering criminal justice. He is a 2014 graduate of Penn State University, where he was a reporter and editor for the school's newspaper, The Daily Collegian. A Pennsylvania native, Adam now calls Brooklyn home.

Bernie Sanders won all three Democratic presidential caucuses Saturday — in Hawaii, Alaska and Washington state — giving him such much needed momentum before the Wisconsin primary.

The company was forced to file for bankruptcy in May.

Deviled eggs are still a must for many families on Easter Sunday.

The resolution, coming in response to the attacks in Brussels, will state that the militant group poses a threat to the “value of freedom in all countries.”

The driver had taken the suspected terrorists to the airport and helped police find explosives and their home.

New York police said Monday they were monitoring Tuesday's terror attacks in Belgium and were in contact with “international partners,” as well as the FBI.

More than half of all Americans favor a Senate review of the nomination of Judge Merrick Garland for the Supreme Court, a poll shows.

Meanwhile, one of the woman's twin daughters was injured by flying debris, a report said.

The cases costing the city this amount reportedly involve accusations ranging from harassment to torture.

At a Saturday event for Donald Trump in Tucson, Arizona, someone kicked and punched a protester in the crowd.

Some Republicans are worried that Hillary Clinton, if elected, would propose a more liberal nominee.

Body parts of a man linked to the Islamic State group were found at the scene of the bombing, which left at least five dead and 36 wounded Saturday.

What To Know About The Pagan Ostara Festival

Ostara is similar in many ways to the Christian celebration of Easter.

Owen Labrie, now scheduled to begin his sentence, had violated a court-ordered curfew eight times since his conviction, prosecutors argued.

Why Some May Oppose Supreme Court Nominee

Merrick Garland, President Obama's choice for the high court, often reviews legislative history before making decisions, a style that has its critics.

From 2014 to 2015, the Fraternal Order of Police saw a 15 percent increase in police officers taking the union's liability insurance policies.

Some 13 presidents have been able to make Supreme Court appointments in election years.

A man recently tried to jump a Secret Service barricade at a Trump rally in Ohio, just one in an escalating series of incidents. 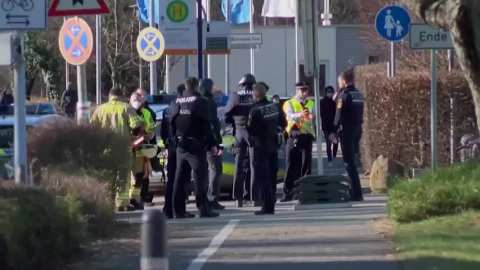 US Suits Accuse Google Of Tracking Data Without Users' Permission