Kweku Adoboli has been charged with fraud and false accounting by London police in connection with unauthorized trades at UBS that caused the bank a $2 billion loss. Adoboli has also reportedly admitted to the bank he caused the losses. His father, a retired United Nations employee living in Ghana, said his son made a mistake.

Arrested at his UBS trading desk, rogue trader Kweku Adoboli allegedly told the bank about his unauthorized trading that resulted in a nearly $2 billion loss.

Forces loyal to Libya's new rulers surged into the desert town of Bani Walid Friday in a fierce attack on one of the last strongholds still in the hands of Moammar Gadhafi loyalists that could prove a major turning point in the war.

Colleagues at UBS called Kweku Adoboli, the trader arrested in connected with a $2 billion loss due to unauthorized trading at the bank, up and coming and someone who worked hard...played quite hard too. Adoboli, 31, was arrested on Thursday by London police on suspicion of fraud by abuse of position and being held in custody at Bishopsgate police station. A graduate of Nottingham University who was born in Ghana, Adoboli studied computer science in college and went to work at UB...

Gadhafi's Mysterious Daughter Hana: Did She Ever Exist?

Gadhafi told the world that his four-year-old girl died during the Regan-era bombing raids on Libya in 1986. But is she alive, living in Tripoli as a doctor?

Kweku Adoboli, the 31-year-old London man accused as the rogue trader who cost Swiss banking giant UBS an estimated loss of $2 billion, is a "well-dressed quiet man" of African origin who wasn't the "tidiest" but is very "well spoken," according to a former landlord.

Gadhafi and Mubarak appear to be surrounded, one by troops and the other by iron bars. In Iran, six people were executed, while in Syria, seven were shot for protesting against the government.

Hundreds of Libyan army vehicles have crossed the desert frontier into Niger in what may be a dramatic, secretly negotiated bid by Moammar Gadhafi to seek refuge in a friendly African state, military sources from France and Niger told Reuters Tuesday morning.

Secret files unearthed from Tripoli headquarters of Libya's intelligence agency, shattered by NATO air-strikes, included startling evidence indicating that top U.S. and British figures offered aid and advice to Moammar Gadhafi's Libyan regime. The papers obtained by various news organizations show that the unholy political partnerships were too murky and that the U.S. and UK governments almost fought among themselves for establishing the Libya Connection.

Oil and an oil sheen covering several square miles of water are surfacing near the site of last year's BP Macondo Well disaster, prompting concerns that the well might not be plugged as Tropical Storm Lee gathers strength.

UCLA Chris Jeon decided he wanted something a little different for his summer vacation.

Oil and an oil sheen covering several square miles of water are surfacing near the site of last year’s BP Macondo Well disaster, prompting concerns that the well might not be plugged.

Moammar Gadhafi, Do You Know Where Your Children Are?

Rebels have overrun the capital of Tripoli, as well as the many mansions and estates owned by the Gadhafi family. The Gadhafis have been driven away, some into hiding and some out of Libya, perhaps for good. But where exactly are Gadhafi's children now?

Moammar Gadhafi's son al-Saadi Gadhafi told Libyan rebels on Wednesday that he is ready to surrender. Rebel commander Abdel Hakim Belhaj said that Saadi called him on Tuesday, hoping to negotiate the terms.

On Monday, rebels showed off Gadhafi's $120 million private jet, giving visiting journalists tours of the leather-trimmed bedroom and living quarters. The plane's interior was decorated in silver and red, and rebels were careful not to disturb the 24 karat gold china.

Gaddafi Could Evade War Crimes Trial by Fleeing to Algeria

Libya's rebel forces were pushing hard on Tuesday to take control over Muammar Gaddafi's hometown of Sirte, even as the fallen despot's family members fled to Algeria and one of the sons was reportedly killed and buried by the rebels near Tripoli.

Libya's new rulers accused Algeria of aggression Monday for admitting the fleeing wife of Moammar Gadhafi and three of his children, but the whereabouts of the former strongman himself remain a mystery a week after his overthrow. 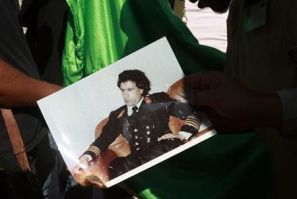 Price on Gaddafi's Head as Fighting Goes on

Libya's new masters offered a million-dollar bounty for the fugitive Muammar Gaddafi on Wednesday, after he urged his men to carry on a battle that kept the capital in a state of fear. 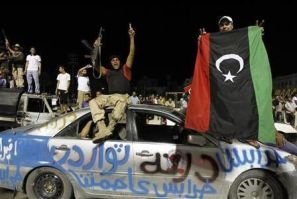 Libya's new masters offered a million-dollar bounty for the fugitive Muammar Gaddafi on Wednesday, after he urged his men to carry on a battle that kept the capital in a state of fear. 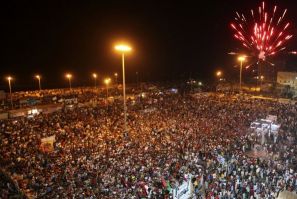 Libyan rebels battled on Tuesday around Muammar Gaddafi's headquarters, where a son of the veteran leader had emerged overnight to confound reports of his capture and to rally cheering loyalists for a rearguard fightback. 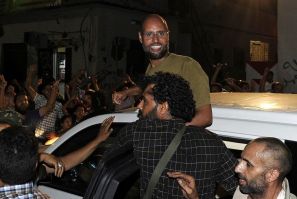 A son of Muammar Gaddafi, previously reported captured, made a surprise appearance with jubilant supporters in Tripoli overnight, urging loyalists to fight off rebels who say they control most of the Libyan capital. 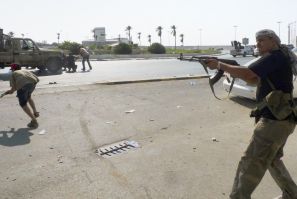 Fight for Gaddafi Compound Will Be Hard: Rebels

The battle to take over Muammar Gaddafi's compound in Tripoli will be fierce, but anyone inside has little chance of escape, a rebel spokesman told Al Jazeera television on Monday. 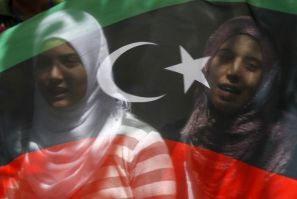 Gaddafi on the Run as Rebels Fight in Tripoli

Remnants of forces still loyal to Muammar Gaddafi staged a desperate stand in Tripoli on Tuesday as rebels fought their way into the capital, but the whereabouts of the veteran leader was a mystery.
Latest news
Gaddafi Hunted as Loyalists Fight on in Tripoli
Obama Says Gaddafi Rule Collapsing, Supports Rebels
Rebels Hold Most of Tripoli, Gaddafi Out of sight
Fighting Continues in Tripoli; Gadhafi's Location Unknown
Gaddafi's Tanks Open Fire in Tripoli
EDITOR'S PICK