The Democratic Republic of the Congo, known until 1997 as Zaire, is a country located in Central Africa, with a small length of Atlantic coastline. It is the third largest country in Africa by area.

The Democratic Republic of the Congo was formerly, in order, the Congo Free State, Belgian Congo, Congo-Léopoldville, Congo-Kinshasa, and Zaire (Zaïre in French). Though it is located in the Central African UN subregion, the nation is economically and regionally affiliated with Southern Africa as a member of the Southern African Development Community (SADC).

The Democratic Republic of the Congo borders the Central African Republic and Sudan to the north; Uganda, Rwanda, and Burundi in the east; Zambia and Angola to the south; the Republic of the Congo to the west; and is separated from Tanzania by Lake Tanganyika in the east. The country enjoys access to the ocean through a 40-kilometre (25 mi) stretch of Atlantic coastline at Muanda and the roughly nine-kilometre wide mouth of the Congo River which opens into the Gulf of Guinea.

Fighting Cholera, Ebola, And Hepatitis-E In Africa, Local Governments Reach Out To U.N. For Help

Heavy rains and poor sanitation in parts of Africa have helped the spread of cholera, ebola, and hepatitis E is several vulnerable populations in South Sudan, DR Congo, and West Africa in general, the U.N. reported.

Ebola Outbreak Doubles In The Congo; 31 Dead, Including 5 Health Workers

An outbreak of the deadly Ebola virus in the Democratic Republic of Congo has health officials scrambling to contain the contagious disease.

Scientists have identified a new species of African monkey with distinct coloring that differentiates it from other species. The new primate species now scientifically named Cercopithecus lomamiensis was first found by a research team during their field surveys in a remote area of the middle Lomami Basin between the Tshuapa, Lomami and Lualaba Rivers in central Democratic Republic of Congo.

Congo Rebel Group M23 Says It Is 'Better Than The Government,' Despite Committing War Crimes

The rebel group M23 is committing serious war crimes in the Democratic Republic of Congo with help from Rwanda, according to a Tuesday report from Human Rights Watch.

60 Miners Killed In Congo Gold Mine; Dying For Illegal Riches In Poverty-Stricken State

At least 60 miners have been killed by a landslide in a remote gold mine in northeastern Democratic Republic of Congo.

A new rebellion in the Democratic Republic of Congo, now within 30 miles of a regional capitol is threatening the country's tin mining industry.

Regional African leaders gathered at a summit in Uganda have failed to come to a consensus on deploying a coalition force to confront militia groups along the eastern border of the Democratic Republic of Congo, where a rebel uprising has displaced hundreds of thousands of civilians.

Ebola Outbreak In Uganda: Where Did It Come From, And Will It Spread?

Ebola remains a mysterious affliction; it has no cure, and no vaccine. It tends to flare up sporadically, but it can kill hundreds whenever it does crop up.

Rwanda has denied that they are helping the Congolese rebels.

What's Behind The Latest Refugee Crisis In The DR Congo?

U.N. peacekeepers in the Democratic Republic of Congo are being redeployed to Goma as a rebel group advances toward the city.

What Is World Heritage?

The U.S. State Department has released a new report on human trafficking around the world and estimates that about 21 million people are directly victimized by the criminal practice.

The State Department released its report ahead of the 150th anniversary of President Abraham Lincoln?s Emancipation Proclamation, which freed the slaves in the U.S. South in 1863.

Child Soldiers: A Plague In Africa

A Wednesday report revealed that the conflict in the Ivory Coast involves mercenaries from neighboring Liberia. The militants have abducted children, murdered civilians and raided communities in Ivorian villages.

African Queen, the historic vessel from Humphrey Bogart's only Oscar winning performance, has been resurrected and restored by a movie-loving Florida couple. The 100-year-old steam boat, named after its starring role in the 1951 hit movie of the same name, provided the setting for the classic picture that told the story of a Canadian steam boat captain and a British missionary working in German East Africa during the First World War.

Kony, who rose to infamy after featuring in a web video by U.S. advocacy group Invisible Children, is still conducting the brutal campaign of rape, mutilation and abduction with his Lord's Resistance Army from the remote jungle areas, Aronda Nyakairima said.

Russia will take all necessary efforts to get its citizen returned to his native country, the foreign ministry said. Bout, dubbed the Merchant of Death and basis for the movie Lord of War, was sentenced Thursday to 25 years in prison. 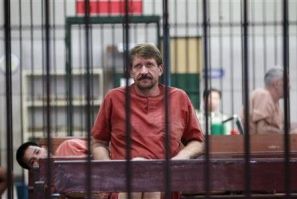 The 45-year-old Russian was busted in a 2008 sting in Thailand in which undercover informants working for U.S. authorities posed as members of the Colombian rebel group FARC. Bout insists he was a legitimate businessman just trying to sell airplanes, not weapons. 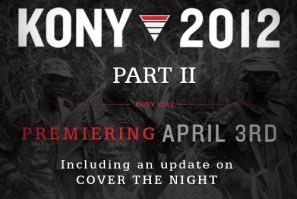 Kony 2012: Sequel For Viral Sensation To Hit The Web, Will Shift Focus Back To Uganda After Director’s Mental Breakdown

Producers behind the 'Kony 2012' video are planning to release a sequel Tuesday that will shift the spotlight back to the horrific war crimes that occurred in Uganda by warlord Joseph Kony. 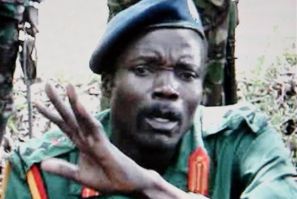 Fabrice Muamba is showing small signs of improvement according to a statement from the midfielder's club Bolton Wanderers. A friend of the soccer star also said that he is speaking minimal words in French and English. 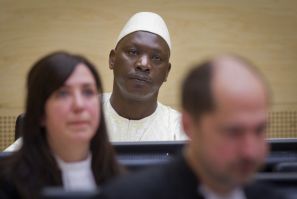 Lubanga, who was arrested seven years ago, could face up to life imprisonment

Radio host, actor and filmmaker Alex Jones, uploaded a video on YouTube, and published it in his Web site infowars.com. The video, which claims that the documentary- Kony 2012, is a complete fraud and that it is Angelina Jolie who needs to be arrested for war crimes, has already had more than 127,410 viewers in just a day. 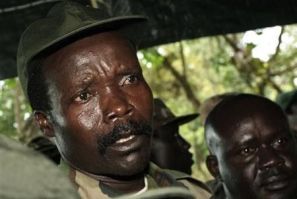