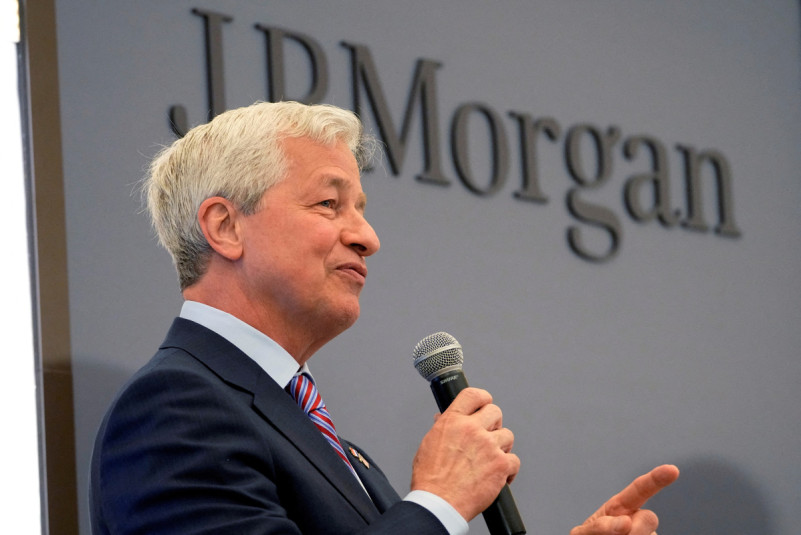 JPMorgan Chase, one of the largest banks in the world, told its employees that the firm will cover expenses for employees who travel to other states where seeking an abortion is easier if needed.

While some male CEOs on the S&P 500 make over $200 million a year, the highest-paid women CEOs all make under $30 million.

In an interview for the company's general membership meeting, Jamie Dimon said that climate change would be solved by corporations, not the public.

What Companies Are Onboard With Defending Voting Rights? Which Ones Aren't?

A two-page published Wednesday turned the focus on corporations and their influence on recent voting laws.

Bernie Sanders said Neera Tanden, President Biden's pick for director of the Office of Management and Budget, had publicly disparaged him and other prominent political figures.

The current income thresholds would follow the same cap from the two previous checks. However, the amount of the payments would phase out faster.

The financial institution is predicting a future price of more than $100,000 per Bitcoin but warns that it will be unsustainable.

An estimated 16 million Americans could head into 2021 without any financial aid as federal benefits from the CARES Act are set to expire on Dec. 26.

Goldman Sachs To Transfer Assets From London To Frankfurt: Source

Goldman Sachs to transfer assets from London to Frankfurt: source

Dropbox Goes 'Virtual First': Employees To Get Permanent Work From Home Through Summer 2021

JPMorgan Chase Fined $920 Mn By US Over Market Manipulation

JPMorgan Chase fined $920 mn by US over market manipulation

Fearing a no-deal Brexit, some major banks are beefing up operations on the continent

Some of the most well-known banks in the world have been transferring huge amounts of cash for mobsters, fraudsters, criminals, drug dealers and oligarchs.

Federal Reserve May Extend Bank Dividend, Buyback Limits As It Starts New Round Of Stress Tests

US Markets Face Near-Term Volatility. Are We Headed For A 'Lost Decade'?

Despite a surge in equity prices this year, the market remains vulnerable to various trends

JPMorgan Chase & Co. sent some of its Manhattan employees home this week after an employee in equities trading tested positive for Covid-19, Bloomberg reported.

Bank Exec Says US Consumers Not Adding Debt Despite Recession

Bank exec says US consumers not adding debt despite recession