NASA’s automated asteroid tracking system has detected two space rocks that are expected to fly past Earth this weekend.

NASA Hits Boeing With 80 Recommendations Before Next Space Test

NASA hits Boeing with 80 recommendations before next space test

A UFO expert claimed to have seen a massive artificial structure on the surface of the asteroid known as Eros. The expert believes the alleged structure was built by aliens.

NASA has kicked off the Curiosity rover’s road trip on Mars that’s expected to last the entire summer. The goal of the trip is to reach a region that might contain traces of water and alien life on the Red Planet.

NASA Identifies Asteroid With Most Number Of Potential Impacts On Earth

NASA has identified the asteroid that could cause the most number of potential impacts on Earth. According to the agency, the asteroid follows an Earth-crossing orbit.

A UFO expert claimed that NASA’s previous mission on the Moon captured a massive alien structure on the lunar surface.

An amateur astronomer from Arizona was able to capture a stunning photo of comet NEOWISE in broad daylight. The comet made its appearance after flying close to the Sun.

A UFO expert claimed to have spotted the remains of a dead alien in a photo taken by NASA’s current mission on Mars.

As the U.S. celebrates the Fourth of July holiday this weekend, Earth will get a flyby from a massive asteroid.

ESA Spacecraft Uncovers How And When Ancient Lakeshore On Mars Formed

Observations made by the European Space Agency’s (ESA) Mars Express allowed new studies to uncover how and when the ancient lakeshore on Mars’ Jezero crater was formed.

NASA Asteroid Tracker: 2 NEOs To Fly Past Earth On Friday

Two space rocks are expected to fly past Earth according to the data collected by NASA’s automated asteroid tracking system.

A UFO expert claimed that NASA’s solar satellite captured an image of a massive, mysterious object flying out of the Sun. According to the expert, the object could be a type of disk-shaped spacecraft.

For the third time, NASA has decided to delay the launch of its newest mission to Mars due to a technical issue.

Through data collected by NASA’s various missions, scientists were able to uncover how the solar winds hitting Earth could also harm the Moon.

Comet NEOWISE Rapidly Brightens As It Approaches The Sun

NASA’s solar satellite detected the sudden increase in the brightness of a comet that’s currently moving towards the Sun. Scientists believe that the comet will become visible to the human eye within the next couple of days.

A video recently released by NASA shows the exact moment when the tank of the Space Launch System (SLS) rocket exploded. It was taken during a test event aimed at determining the structural limits of the rocket component.

NASA’s asteroid tracking system is currently monitoring two asteroids that are currently approaching Earth. According to the data collected by the agency, the approaching asteroids follow Earth-intersecting natural orbits. 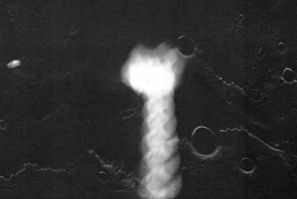 A UFO expert claimed that NASA’s previous mission on the Moon captured an alien vessel hovering over the lunar surface. 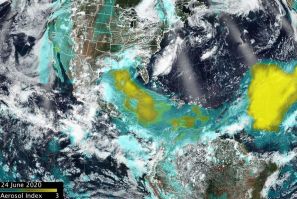 Meteorologists warned that a second wave of the massive dust cloud from the Sahara desert will hit the U.S. this week. 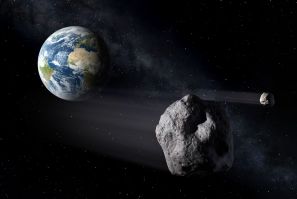 NASA’s automated asteroid tracking system has spotted a total of six near-Earth objects that are expected to fly past the planet this week. One of the approaching asteroids is almost as big as the Great Pyramid of Giza. 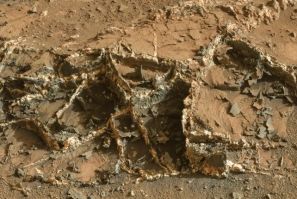 A UFO expert claimed to have spotted the remains of an ancient alien structure on Mars. The expert believes the alleged structure was constructed by a race of small aliens on the Red Planet. 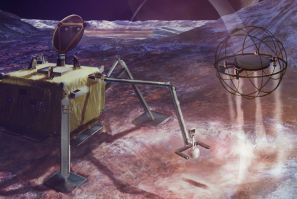 NASA is currently looking into the idea of exploring the icy moons of Jupiter and Saturn using steam-powered robots. According to the agency, the unique design of the robots will enable them to explore the moons without affecting its environmental conditions. 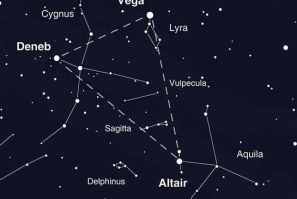 How To Spot The Summer Triangle Of Stars In The Sky

An annual cosmic phenomenon known as the Summer Triangle has once again appeared in the sky as the summer season rolls in. This is a cosmic pattern that’s formed by three stars from different constellations. 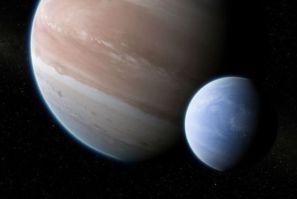