The UK lawmakers are particularly concerned about the potential for more illegal immigration into Europe should Turkey join the EU, given the inadequate security it has along its borders with Iraq, Syria and Iran.

Texas inmate Mark Stroman was executed on Wednesday night for hate crimes, making him the seventh person to be executed in the state this year.

The Obama Administration has asked the state of Texas to refrain from executing a Mexican national who was convicted of raping and murdering a Texas teenaged girl.

Singapore, like much of Southeast Asia, has very draconian laws, particularly with respect to drug trafficking – for which, a conviction often leads to the death penalty.

The US government, which has faced a slew of cyber attacks in recent months, has gone on the offensive by working on National Cyber Range project, a platform that will function as a test-bed for cutting-edge cyber defense technologies and help train cyber warriors.

The Libyan woman who announced to international media that she was gang-raped by Gaddafi troupes has been relocated to Romanian UN headquarters.

The arrest of Serbian war criminal fugitive Ratko Mladic has been hailed by leading political figures in Europe and the U.S.

Libya said Monday that tens of thousands of telecoms workers would act as human shields to deter NATO strikes on communications infrastructure, which it said had inflicted serious financial damage.

Does Dominique Strauss-Kahn Have Diplomatic Immunity?

The arrest over the weekend of Dominique Strauss-Kahn on charges of sexual assault has raised many troubling questions. Among them: does the IMF managing director have diplomatic immunity?

American intelligence officials in Pakistan have revealed that, apart from the three hostile widows of Bin Laden, some of his daughters were also among those quizzed by US officials in Pakistan under the watchful eyes of Inter-Services Intelligence (ISI). Although they were interviewed as a group, only Khariraih Sabar, who is believed to be Laden's third wife and the eldest of them all, spoke up.

The Secretary General of Iran’s Supreme Council for Human Rights, Mohammad Javad Larijani, said the Al-Qaeda chieftain deserved to have a fair trial rather than face a “unilateral execution” by American commandos.

Omar, 30, said he always disagreed with his father over the violent means and had sent numerous messages denouncing them and urging him to “change his ways”. But even the U.S. forces which had killed Osama have violated the international law by killing an unarmed terrorist leader without a trial, he said in statement issued by the Bin Laden family but signed only by him. The statement was the first by the family after Osama's killing.

The killing of dreaded terrorist Osama bin Laden has triggered a controversy - did it violate international law?

An estimated 200,000 people are held as prisoners in North Korea's network of political prison camps, according to a latest report released from Amnesty International.

Osama killing a 'perversion' of justice

US special operations forces killed Osama Bin Laden this past Thursday but the slaying is raising major concerns that the United States has gone too far in judge, juror and executioner of the world's most wanted man. Further more, the killing could work against the US to stir up more anti-American sentiment among radical militants.

North Korean camps for political prisoners are expanding in size, according to a report from Amnesty International.

Global condemnation of violence in Syria

Political leaders around the world have condemned the spiraling violence in Syria.

Some British MPs uneasy about seeking regime change in Libya

Three Conservative MPs have said that Parliament should be recalled from Easter recess because Prime Minister David Cameron’s strategy in Libya is clearly designed to remove Moammar Gaddafi from power, which is not what the original intent was for the Libyan campaign, they claim.

This article originally appeared in The Times, The Washington Post and Le Figaro

Amnesty International said it has new evidence of atrocities committed by soldiers loyal to Moammar Gaddafi, including the execution of rebel prisoners near the town of Ajdabiya.

The European Union (EU) and Palestinians have condemned a plan by the Israel government to construct hundreds of homes in an area claimed by Palestinians.

As efforts to forcibly remove Ivory Coast president Laurent Gbagbo have been launched, Ibrahim Coulibaly, a spokesman for the Ivory Coast embassy in France has re-asserted that no French forces were involved in the assault. 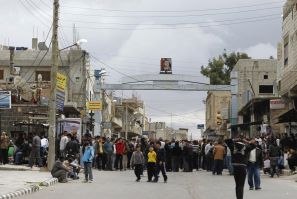