The soldier said his unit had not been given any equipment apart from snipers "from 1945" to fight in the war.

One of the spies caught by Ukraine's Security Service agents had previously worked for the police department and Interior Ministry in Dnipropetrovky.

Ukraine's prosecutor general's office said they are investigating more than 11,000 other cases of war crimes committed by Russian invaders.

The coup comes as more than 27,000 Russian soldiers have been killed in the war in Ukraine.

Russia was unable to prevent a repeat breach of one of its most-valued companies in less than 3 months. The KelvinSecurity team plans to initially release "about 10,000" documents "to expose the...

More Russian Soldiers Refuse To Fight In Ukraine: 'They Couldn't Force Me'

Ukraine’s Defense Ministry on Thursday said a total of 26,650 Russian military personnel have been killed since the beginning of the war.

One of the victims told his friend that the Russian soldiers told him they do not kill civilians, and then they shot him.

Russian Soldier's Dad Says 'Sh*t In Your Hat,' Put It On Commander's Head

The soldier's father urged his son to take revenge after commanders did not take action as they were being met with Ukrainian resistance.

The documents had been abandoned in the Ukrainian town of Trostyanets.

Putin Could Turn To 'More Drastic Means,' Including Nuclear Weapons

Director of National Intelligence Avril Haines said that Putin could institute martial law in his country to ensure Russia's victory in the war.

Members of the Chechen army told a Russian soldier they were doing reconnaissance work before they stole his weapon.

“A city called Mariupol, in fact, no longer exists. There are ruins and there is an Azovstal factory, the underground bunkers of which are sheltered by both civilians and the military,” Ukraine’s...

Here's Why Putin Is Angry At Wikipedia; Wants Kremlin-Sanctioned Encyclopedia

Russian soldier Ivan Klymenko first promoted Nazi propaganda in a phone call to his mother that was intercepted and recorded by Ukraine's Security Service.

Russian soldiers stole a total of 198 gold items from the museum in Melitopol.

Russia Could Formally Declare War On Ukraine On May 9, Officials Suggest

Russian President Vladimir Putin may also consider annexing the breakaway regions in Ukraine or declare victory in Mariupol, said Michael Carpenter, the U.S. Ambassador to the Organization for...

The newly-released recording of an intercepted phone call is the latest evidence of the declining morale among Russian soldiers.

The intelligence official did not offer any details of how the Russian president could be offed.

Russia Maltreats Own Soldiers 'Almost To The Point Of Execution': Report

A Russian soldier said they suffered maltreatment after they refused to fight in the war in Ukraine. 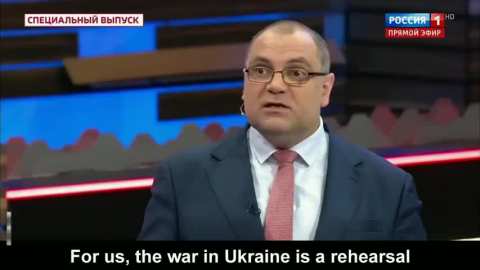