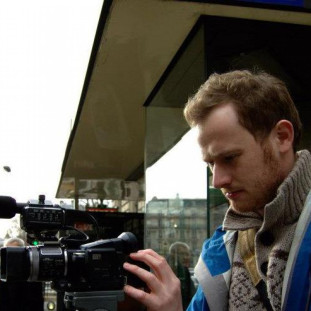 Christopher is the defense reporter for International Business Times, counting on his four years as logistics officer in the British Royal Navy to inform his daily reporting on the nexus of business, politics, international affairs and defense. He came to IBT after graduating from the renowned investigative course at Columbia University's Graduate School of Journalism, where he delved into an array of topics, including FIFA corruption and employment discrimination against military veterans.
Once a freelancer, Christopher has reported from Senegal, all across Europe, New Zealand and Australia. His investigations have appeared prominently in the New York Times and FourFourTwo magazine, where he won an Overseas Press Club award for his reporting on the human trafficking of young soccer players from Senegal to France. Originally from Edinburgh, Scotland, he currently lives in New York and splits his time between playing Sunday league soccer and frightening people by wearing his kilt.

Why Was Brussels Attacked? Belgian Police Hampered By Outdated Laws And Lack Of Funding

The $1.5 trillion aircraft has experienced significant delays and cost overruns since Lockheed Martin was awarded the contract in 2001.

Since ISIS came to prominence in Syria and Iraq over the last 21 months, it has raised billions in oil revenues and traded for weapons on the border.

Amid US Fight Against ISIS, Lockheed Martin Building More Bombs And Missiles For Military

The defense giant is upping its manufacture of missiles and bombs as the U.S. military fight against ISIS continues.

The Kremlin says the advertisement shows Russia in a bad light and is a recurring feature of U.S. presidential campaigns.

A spokesperson for U.S. military operations said a very small number of Russian jets have withdrawn, while ground forces are still fighting.

Service members are prohibited from gambling on federal property or aboard naval craft, according to military justice codes.

The E.U. country wants to get rid of its old Soviet-built fighting vehicles amid regional aggression from Russia.

The surprise move to withdraw could result in major financial and geopolitical benefits for Moscow, but it comes with risk, too.

The Russian-built aircraft was allegedly brought down by a U.S.-made Stinger missile.

Overall, U.S. military plans that could open as many as 220,000 positions to women have now been approved, Defense Secretary Ash Carter said.

A guard and the warden were stabbed while attempting to break up a fight between inmates.

The remarks by U.S. Sens. Ted Cruz and Marco Rubio came after Donald Trump canceled a campaign rally in Chicago because of security concerns.

Amid Trudeau White House Visit, A Canada Deal For Boeing F/A-18 Super Hornets Could Save Thousands Of Jobs

The nation may be eyeing the company’s F/A-18 Super Hornet as an alternative to Lockheed Martin’s F-35.

The plan is a bid to ease travel between the two countries, although U.S. officials have said those entering the U.S. will need to supply more information.

The $350 million deal includes eight unmanned drones that could be used to monitor terrorism in the Middle East.

The Senate Armed Services chairman is concerned that the so-called cost-plus contract could see the government charged far more than it anticipated.

Pratt & Whitney will build the engine as part of a $80 billion Northrop Grumman defense contract for the Long Range Strike Bomber.

European Union negotiations to close the route could force desperate people to take dangerous paths to the continent, experts say.

Although businessman Donald Trump didn’t serve in uniform himself, he impresses many veterans with his blunt commentary.

Already having a hard time policing sanctions on its longtime ally North Korea, China now fears a humanitarian crisis in the hermit kingdom.

Boeing’s St. Louis manufacturing plant is relying on new business to save thousands of jobs, but the Navy so far has not been able to find the cash to buy more of the aircraft.

Former GOP presidential candidate Mitt Romney laid into Donald Trump and Hillary Clinton as unfit for the White House in a speech Thursday.

Will Cuba Take Over Guantanamo Bay? Military Lawmakers Claim Obama Will Give Base To Castro-Led Regime

Donald Trump has been offending people for years, not just since he announced his run for president last June.