Moody's to Global Leaders: Stop Threatening Your Banks With Capitalism

Thursday's downgrade contained a veiled threat that pointed at politicians in Germany, the United Kingdom, France and the United States and plainly stated, Stop talking about making the banks responsible for their own follies -- or else.

Moody's Investors Service downgraded 15 global financial institutions Thursday, including five of the largest U.S. banks, nine major European banks and the Royal Bank of Canada (NYSE: RY), a move that could tighten borrowing and require the companies to post billions of additional collateral.

Michelle Obama Derides People Who Got Her Husband Elected

First Lady Michelle Obama spent her weekend disparaging the fat paycheck, the fancy office, the impressive lines on our resumés.

Stock markets in China and Hong Kong advanced Wednesday on speculation that the People's Bank of China will cut interest rates soon to help the economy regain its growth momentum.

ECB To Keep Pressure On Governments, Could Signal Rate Cut

The European Central Bank is expected to hold back from policy moves when it meets on Wednesday, instead urging governments to address the euro zone's crisis, but it could indicate a readiness to cut interest rates as early as next month given a weakening economy and Spain's banking troubles.

Clive Chajet, celebrated brands consultant for companies, offers his free advice to Facebook, Yahoo and Hewlett-Packard about undoing the damage from recent mishaps: stick to business and the share price will follow.

The legal activist gives his first public speaking engagement in America after leaving from China.

Debrahlee Lorenzana, The Lauren Odes of 2010 Fired For Being 'Too Sexy,' Speaks Out: ?I Ended Up Fighting Citibank On My Own?

Debrahlee Lorenzana, who was fired as a banker from Citibank in 2010 for being too sexy, spoke out about the similarities of her case with Lauren Odes', the woman fired from New York lingerie store Native Intimates for being too busty. Lorenzana revealed that she ended up fighting the suit, filed for similar discriminatory reasons, alone after lawyer Gloria Allred dropped her when the cameras stopped flashing.

BlackRock Buys Stake in Formula 1 Ahead of Singapore IPO

Portuguese investment bank Espirito Santo has downgraded Indian bio-technology major Biocon from neutral to sell based on several issues, including accounting practices which the bank says are objectionable.

Facebook IPO: How To Buy Stock Shares, But Why It's Okay If You Don't Succeed

One of the biggest and most anticipated IPOs of the year, quite possibly the decade, is ready to hit Wall Street tomorrow, but if you're thinking about buying shares, you're not alone. Not in the least. If you're looking to get a piece of the stock, we're here to help you. But be warned: It will not be easy.

The euro zone just avoided recession in early 2012, but the region's debt crisis sapped the life out of the French and Italian economies and widened a split with paymaster Germany.

Global bank stocks fell Monday as investors panicked that a weekend electoral impasse in Greece might be a prelude to that country to leave the 17-member euro zone.

Ally Financial Inc's Residential Capital unit is nearing a bankruptcy filing, sources familiar with the situation said on Sunday, in a move that could help the taxpayer-owned auto lender to shed its troubled mortgage business but also spur drawn-out legal fights.

Ally Financial Inc's Residential Capital unit is nearing a bankruptcy filing, sources familiar with the situation said on Sunday, in a move that could help the taxpayer-owned auto lender shed its troubled mortgage business but also spur drawn-out legal fights. 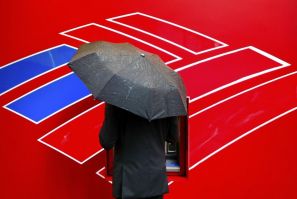 Bank Stocks: Are They Cheap Because They Are Bargains Or Value Traps?

Since hitting 52-week lows last October, U.S. financial-sector stocks have staged a strong comeback -- rising some 34 percent. Despite this uptick, they still look like bargains, at first blush. 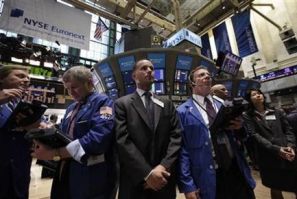 Stock index futures fell on Friday and were on track to extend the week's losses after JPMorgan Chase & Co revealed a shocking trading loss of at least $2 billion from a failed hedging strategy.

Stock index futures fell sharply on Thursday evening as JPMorgan Chase & Co stunned investors with news that its chief investment office had incurred significant mark-to-market losses that it said could easily get worse. 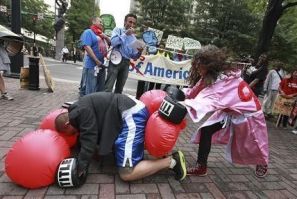