Seattle lost out on a new NBA franchise, but the infrastructure is in place.

The Maloofs want to sell the Sacramento Kings to the group that want to relocate the team to Seattle.

Both Seattle and Sacramento are battling to be the home of the Kings.

Sacramento continues to fight to keep the Kings within the city limits.

Microsoft 2Q Earnings Down But Beat Estimates By A Penny

Microsoft Corp. reported second quarter results that beat estimates by a penny but still fell from a year earlier due to the slump in PCs.

Why Would Microsoft Invest In A Dell Buyout?

Why would Microsoft (NASDAQ:MSFT) invest in a buyout of Dell (NASDAQ:DELL)? Better return plus customer support.

Microsoft Earnings To Drop Despite Windows 8

A late shipment of Windows 8, the decline in global PC sales and ho-hum demand for its Surface tablets is expected to weigh on results.

In 2012, battles were fought on retail shelves, on TV ads, and in social media and courtrooms -- and living rooms -- around the world.

Here's an idea: If Apple doesn't want Forstall's expertise on its mobile software anymore, Microsoft is looking for a new head for Windows.

Why Did Microsoft Boot Windows Czar?

Steven Sinofsky, president of Microsoft's Windows division, is leaving the company immediately, weeks after the release of Windows 8, which he led, the company said.

Microsoft may be about to try a hail mary marketing strategy soon, as A-list celebrities such as Jay-Z and Gwen Stefani star in commercials for the tech giant’s new Windows Phone 8.

Windows 8 is just one day away from its release date, and Microsoft took the stage to show users what to expect from its new Windows Store.

Windows 8 Release Event: Where To Follow Coverage Of Microsoft's Launch

The release date for Windows 8 is only one day away, and Microsoft is holding its event in New York City to showcase the finished product.

With just a few hours away for the launch of Surface tablet, Microsoft's Chief Executive Officer Steve Ballmer has confirmed his desire to build more devices. 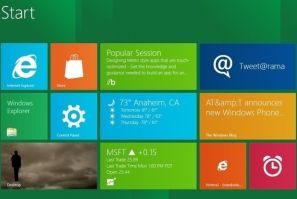 Bill Gates On Windows 8: 'A Big Milestone For All Microsoft Products'

The release date for Windows 8 is less than a week away, and former Microsoft CEO and chairman Bill Gates has discussed the company's future. The release date for Windows Phone 8 may be quickly approaching, as Best Buy has posted pre-order and price information for HTC's Windows Phone 8X and Nokia's Lumia 920.

Windows 8 Is Here: Can It Save Microsoft?

This week, Microsoft (Nasdaq: MSFT) finally ships Windows 8, the OS the company claims is its biggest product in 17 years. 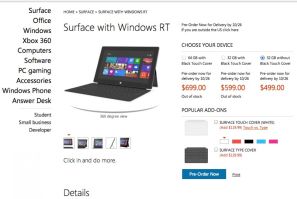 The price for Microsoft's Surface tablet will start at $499, according to a product listing posted by the company ahead of preorders. 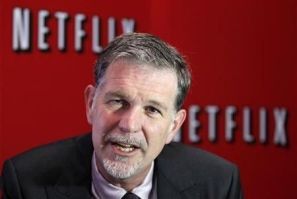 Netflix's Hastings To Step Down From Microsoft Board 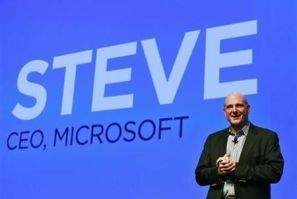 Microsoft Transforms Into A Devices And Services Company

In a letter to shareholders Tuesday, Chief Executive Officer Steve Ballmer has officially stated that Microsoft is a devices and services company.