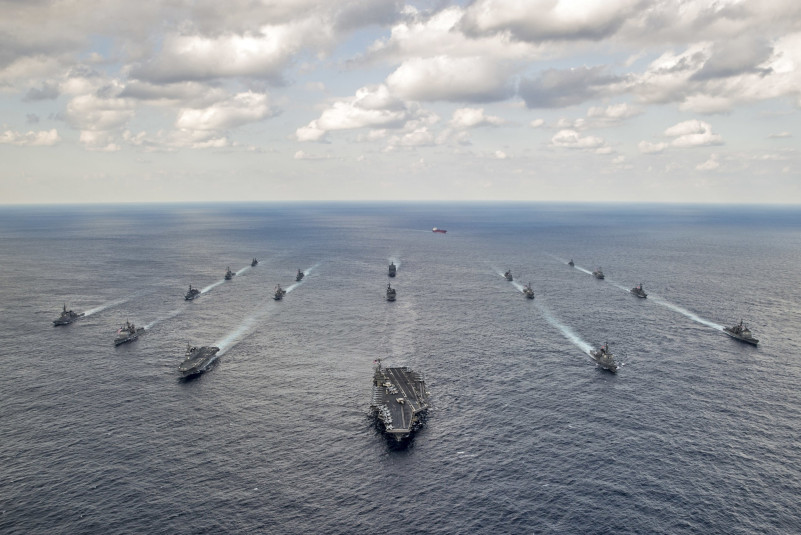 The Saildrone Explorer USV was launched into the waters from the Royal Jordanian naval base in Aqaba Sunday.

The U.S. Department of Defense confirmed that it will launch a task force that will look into the UFO sightings and encounters reported by members of the military.

The U.S. Marine Corps has banned the installation of crypto mining apps and other apps it deemed security risks and advised its personnel to remove them.

Stephen Parshall is one of three men accused of planning to start riots during the Black Lives Matter protests in Las Vegas following the death of George Floyd on May 25.

The U.S. will soon conduct a military exercise in the South China Sea with two nuclear-powered aircraft carriers, but the timing of the drills coincide with some Chinese naval activity in the region.

A new video posted on YouTube claimed to show a fleet of UFOs flying over a populated area in New Jersey. According to a UFO expert, aliens might be using the vessels to observe humans in the area.

The former captain said he didn't realize the conversation he was having with his wife was being recorded at the time.

Two Russian SU-35 jets conducted the "unsafe" intercept while a the U.S. Navy's P-8A surveillance plane was in flight in international airspace over the Mediterranean Sea.

The U.S. Navy has patented advanced plasma tech that can create 3D images in the sky. This defensive tech might explain some of the UFO sightings.

Secret Service agents who are “close to the president” and those within the vicinity of the Oval Office will start wearing face masks.

The Pentagon has officially released three videos showing the encounter between pilots of the U.S. Navy and UFOs. According to the military department, the videos were formally released in order to confirm their authenticity.

The PLA Navy of China launched a flotilla, led by the Liaoning aircraft carrier and escorted by additional destroyers Saturday night in a bid to prove that Chinese defense forces have a superior handle on the spread of the novel coronavirus.

The Navy confirmed that the crewmember didn’t come into contact with patients.

A report reveals that YouTube is releasing a new feature to take on one of today's fastest growing social media platforms, TikTok.

The ship is “operationally capable” and can do its mission if “required to do so.”

“Personnel with whom the individual has had close contact with have been notified and are in self-isolation,” according to a statement from the U.S Naval Academy.

The US Navy has deployed two littoral combat ships to the South China Sea in what it calls a show of force, but which may actually be a marketing ploy.

Navy veterans who experienced a close-call with a UFO in 2004 claimed they were forced by unknown individuals to surrender all off their evidence regarding the strange encounter. Up to this day, the Navy officials are still unsure of the individuals’ identities or which agency they worked for.

The US Coast Guard is expected to take delivery of a new Cutter in 2020.

The submarine was discovered 1,400 feet underwater, about 50 miles south of Okinawa, Japan.

A mysterious glow was captured in one of the photos shot by NASA's Mars Curiosity rover. Could it be a UFO?

Navy Railgun Weapons Could Be Used To Mine Moon’s Surface

The U.S. Navy’s new railgun weapon project could soon be used to mine ores from the surface of the Moon.

The pilots flying the P-8 Poseidon told officials that they never felt threatened or unsafe by the maneuvers of the Russian jet, although the intercept was deemed “unprofessional.”

Fans will have to wait just a little while longer for a new episode of “Designated Survivor.”