Tropical Storm Nicole approaches a battered Florida and is forecasted to upgrade into a Category 1 hurricane.

A growing number of Florida residents have become infected with a flesh-eating bacteria following the devastation caused by Hurricane Ian.

Tropical Storm Ian grew stronger and is expected to become a hurricane.

Hurricane Fiona is headed for Puerto Rico and is causing life-threatening conditions.

The Weeknd Wins Grammy Despite Boycott Of Award Show

The Weeknd won a Grammy for best melodic rap performance for his feature on Kanye West's song "Hurricane."

Kanye West is remorseful about his mistakes during his marriage to ex Kim Kardashian, according to a report.

Hurricane Henri is expected to make landfall in either New York or New England on Sunday, making it the first time in 30 years a hurricane has come ashore in the area.

Kache Wallis, 4, was found dead inside a small toy chest in his bedroom, with authorities determining that he had died from accidental asphyxiation.

Tropical storm Elsa is expected to become a category 1 hurricane by the time it reaches land just north of Tampa, Florida at midnight.

For the first time ever, researchers have recorded a "space hurricane," 600 miles of plasma raining electrons down on the North Pole.

Where Is Tropical Storm Zeta Headed Next?

Tropical Storm Zeta expected to hit the southern U.S. coast as a hurricane by mid-week.

Tropical storm Epsilon has rapidly intensified over the last 24 hours.

Heavy rainfall and strong winds are expected to endure for most of the weekend, with the latter possibly leading to isolated tornados.

A Tired Gulf Coast Prepares For Hurricane Delta To Hit

Louisiana was in a state of emergency as coastal communities prepared for another storm to make landfall during a busy 2020 Atlantic storm season.

Hurricane Delta Hits Yucatan On Way To US Gulf Coast

Flash flooding and a dangerous storm surge is forecast to hammer southeastern Mexico before the storm enters the Gulf of Mexico.

A couple from Oklahoma is hopeful that donations to a GoFundMe page will help them get money back from their canceled honeymoon after Hurricane Delta forced them to evacuate.

Flash flooding and dangerous winds are forecast to hammer the Gulf Coast heading into the weekend as Delta pushes north. 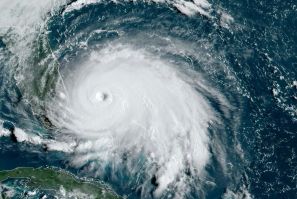 Two More Tropical Storms Being Tracked In The Caribbean

Tropical Storm Delta is forecast to push northwest toward the U.S. Gulf Coast, while Tropical Storm Gamma is expected to hover over southeastern Mexico 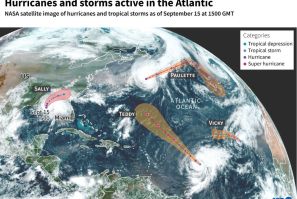 Some Good Weather News: Gulf Coast Getting Much Needed Break

One meteorologist warned that while the break is a welcome one, residents shouldn't let their guard down.

Hurricane Paulette has regenerated into a "zombie storm" as the nation faces an unprecedented hurricane season. 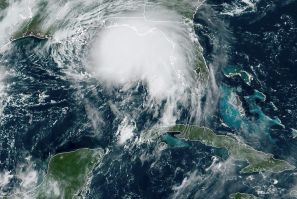 Tropical Depression 22 is forecast to grow as it approaches Texas while Hurricane Teddy storm swells could produce dangerous tides along the East Coast.

At least one person was killed in Alabama from the storm as nearly 600,000 customers were without power along the Gulf Coast.

Where Is Jim Cantore Now?

Jim Cantore from the Weather Channel has arrived in Pensacola Beach to track Hurricane Sally.

Over 675,000 customers along the Gulf Coast were without power as widespread flash flooding was reported from heavy overnight rain.
Latest news
Hurricane Sally's Slow Crawl Could Lead To 'Historic' Flooding
Sally Upgraded From Tropical Storm To Hurricane
Tropical Storm Sally Projected To Make Landfall As A Hurricane
Hurricane Center Tracking 5 Tropical Waves In The Atlantic
Thousands In Utah Without Power After Hurricane Force Winds
EDITOR'S PICK