A fashion week is a fashion industry event, lasting approximately one week. This event allows fashion designers, brands to display their latest collections in runway shows. it also allows buyers to take a look at the latest trends. Most importantly, it lets the industry know what is "in" and what is "out" for the season. The most prominent fashion weeks are held in the four fashion capitals of the world: London,Paris,Milan and New York.

In the latest twitpic controversy, Ireland Baldwin, the 16-year-old daughter of Alec Baldwin and ex-wife Kim Basinger, decided to show off her body in a provocative black and white bikini to her almost 19,000 Twitter followers on Sunday.

IBTimes spoke to some of the top makeup and nail artists throughout the course of New York Fashion Week, who revealed their secrets for flawless runway beauty and their makeup weapons of choice as well as their inside scoop on hottest trends and products for the upcoming seasons.

New York Fashion Week: The Most Incredible Moments And Photos

While Mercedes-Benz Fashion Week may be all about clothes, accessories, hair and makeup in order to forecast what looks people will be sporting and buying in stores for the upcoming season, the week-long biannual event presents many opportunities for stellar photos. Here?s a look back at some of the most incredible moments at New York Fashion Week for the Spring 2013 season.

Rachel Roy turned her showroom in New York into "a dreamland where the unexpected collide" for her Spring 2013 presentation at Mercedes-Benz Fashion Week on Tuesday, joining whimsy with traditional.

Having gone public almost a year ago in December and since hit $53.55 per-share as of Friday afternoon, Michael Kors went public again on Wednesday, this time with his Spring 2013 collection at New York Fashion Week.

Cassandra Bankson, an acne ridden teen who made headlines when she made a viral YouTube video on how to cover up acne-plagued skin, appeared on the runway at the recent New York fashion week.

"Twilight" star Kristen Stewart may have never cheated on Robert Pattinson at all. A new video has hit the web that analyzes the now-infamous photos of Stewart and Sanders in a passionate embrace. It alleges that the photos were doctored and that Stewart, Pattinson, Sanders, and Sanders' wife, Liberty Ross, all orchestrated a publicity stunt to further their careers.

Moving on from her very public split with Tom Cruise, Katie Holmes received glowing reviews from buyers and editors on Wednesday, when she presented her fashion line, Holmes **9** Yang, at New York Fashion week for the first time.

IBTimes documented all of the celebrities who attended Spring 2013 New York Fashion Week.

Stacy Keibler Steps Out Without George Clooney Amid Breakup Rumors

Stacy Keibler looked pretty in pink on Wednesday, when she was spotted stepping out at a Marchesa spring 2013 fashion show at Grand Central Terminal for New York Fashion Week. Despite swirling rumors that the model and former professional WWE wrestler had split from her boyfriend of one year, George Clooney, Keibler looked poised and confident in a velvet baroque one-shouldered dress.

The same day Kate Middleton donned one of her dresses on the first day of her Diamond Jubilee tour, designer Jenny Packham debuted her Spring 2013 collection at New York Fashion Week which she said was based on the women of yesteryear's SIn City.

The Marc Jacobs show at Mercedes-Benz Fashion Week in New York was a madcap scene evoking the feeling of Andy Warhol's Factory in the 1960's with a swingin' mod Spring 2013 collection.

Pretty scary or scarily pretty was the choice revelers had to make after the Chris Benz presentation on Monday at Avery Fisher Hall at Lincoln Center during Mercedes-Benz Fashion Week in New York.

While you are starting to dig out your shearling for the upcoming cold weather, the fashion crowd is already planning their spring wardrobes based on the range of looks that have been showcased during New York Fashion Week. To help sort through the barrage of images flooding your feeds, we broke out the most important trends to give you a head start.

Evening gowns that evoke a sense of motorcycle-chic toughness? Reem Acra, the same designer known for elegant bridal gowns, made the impossible possible on Monday afternoon at Mercedes-Benz Fashion Week in New York with her Spring 2013 collection inspired by Aaron Young's motorcycle series. 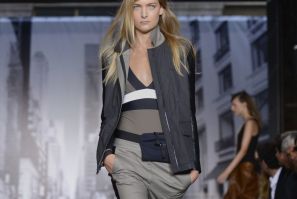 Designer Donna Karan sent her DKNY Spring 2013 collection down the runway on Monday, evoking a downtown understated cool sensibility her urban line is best known for. 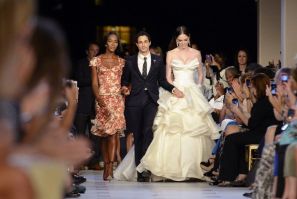 Zac Posen enlisted supermodel friends Naomi Campbell and Coco Rocha to walk the runway in his Spring 2012 show at Mercedes-Benz Fashion Week in New York inspired by "the great elegant women that inhabit our Earth." 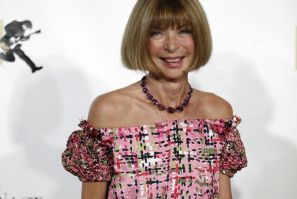 Anna Wintour Cheers On Serena Williams At U.S. Open Women's Final As She Takes A Break From Fashion Week 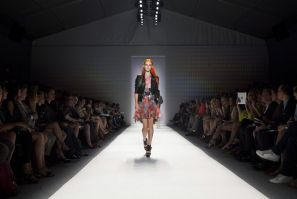 For her Spring 2013 collection at Mercedes-Benz Fashion Week, Nicole Miller created "a juxtaposition of improbable things" at her Friday show: art, sci-fi, digital and nature. Wonder how this all came to fruition? Miller explained backstage before the show to IBTimes that it the fusion of these four notions was a bit like a domino effect. 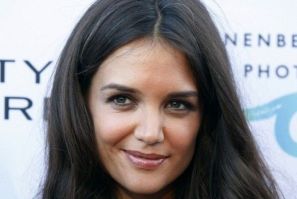 Katie Holmes Will Be The New Face of Bobbi Brown Cosmetics

Katie Holmes appeared in public for the first time since splitting with her ex-husband, Tom Cruise, to present an award at the 2012 Style Awards in New York, and the star, whose career has recently seen a sudden upswing, seems to be about to turn another corner in her life. 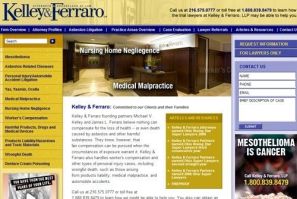