Carleton "Carly" S. Fiorina (born Cara Carleton Sneed; September 6, 1954) is an American businesswoman. Fiorina served as chief executive officer of Hewlett-Packard from 1999 to 2005 and previously was as an executive vice president at AT&T, where she coordinated the spinoff and initial public offering of Lucent.

Fiorina was considered one of the most powerful women in business during her tenure at Lucent and Hewlett-Packard. The spinoff of Agilent Technologies – which had been initiated by her predecessor, Lew Platt – was completed shortly after she joined the company in 1999. Under her leadership, in 2002, the company completed a contentious merger with rival computer company Compaq. In 2005, the Hewlett-Packard board forced Fiorina to resign.

In 2008, Fiorina served as a top economic advisor to Republican presidential candidate John McCain. She currently serves on the boards of several major business organizations. In November 2009, Fiorina announced she would seek the Republican nomination to challenge incumbent Democrat Barbara Boxer for the junior United States Senate seat representing California.

Former Secretary of State Colin Powell and former presidential candidate Carly Fiorina are just some of the prominent Republican figures voting for Democrat Joe Biden in the fall election.

"I would argue that our responsibility is not to him, but to the American people. And he should resign," Texas Democrat Sheila Jackson-Lee said following President Donald Trump's remarks about an MSNBC TV host.

“I will be the greatest jobs president that God has ever created,” Trump vowed in June 2015, when he announced his candidacy.

Trump Could Face Opposition From GOP In 2020

The next presidential election could include several notable Republicans challenging Trump.

"I had witnessed Donald Trump tell managers many times while he was visiting the club that restaurant hostesses were 'not pretty enough,'" one employee reportedly said.

The TV spot in which Carly Fiorina introduced herself as Ted Cruz’s running mate had the most negative impact of any campaign ad this year, a study found.

Has ‘Stop Trump’ Been Stopped?

With Ted Cruz ending his race for the Republican nomination, Donald Trump becomes — as he has already called himself — the presumptive nominee.

Cruz, Trump Look Ahead To California

Mathematically eliminated from securing the nomination ahead of the GOP convention, Sen. Cruz's only hope is to stop Trump from reaching 1,237 delegates.

The Texas senator won about 80 total delegates at GOP state conventions Saturday — but may face a court fight from Donald Trump.

Cruz Names Fiorina As His VP

Some believe selecting the former Hewlett-Packard CEO, once a popular presidential candidate, could help Cruz with women voters.

Marco Rubio disagreed with Donald Trump over the front-runner’s comments on Islam during Thursday’s debate.

Here’s a breakdown of who has won which states and how many delegates thus far.

Days ahead of primaries in Ohio, Florida and other states, Republicans toned down the rhetoric on Thursday.

The former Hewlett-Packard CEO endorsed the Texas senator Wednesday, saying he is the only candidate who can stop Donald Trump.

The Republican won more than two-fifths of male voters, but fared poorly with women, exit polls by Edison Research revealed.

The Way The GOP Can Dump Trump

Stopping the presidential hopeful from securing the Republican nod hinges on whether he has enough delegates to be nominated on the first ballot at the party’s convention.

“Over half of the Republican electorate feel ‘betrayed’ by their party. That is a big number and a strong word,” Carly Fiorina says at the Conservative Political Action Conference. 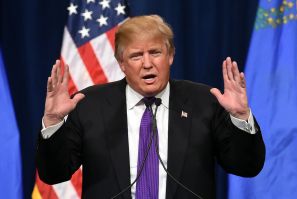 Donald Trump has been offending people for years, not just since he announced his run for president last June. 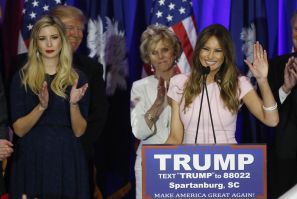 Melania Trump Says She 'Followed The Law' As Immigrant

The Donald's wife said he has not gone too far with his immigration policies. 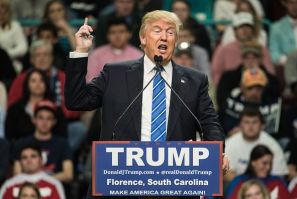 As Republican candidates prepared to clash Saturday night, the businessman was still the favorite among GOP voters, data showed. 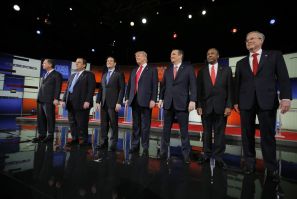 If Saturday's Republican debate is anything like the previous GOP showdowns, it’s sure to be an entertaining night. Pour yourself a drink and pick a candidate. 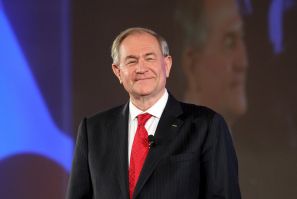 Jim Gilmore Was Running, But Now He’s Not

The field of Republican presidential candidates is down to six, as the remaining contenders prepare for another debate and the South Carolina primary election. 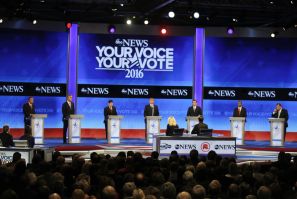 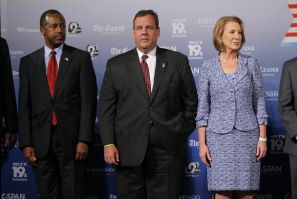