Former White House chief strategist Steve Bannon said, "I’d actually like to go back to the old times of Tudor England, I’d put the heads on pikes, right, I’d put them at the two corners of the...

Three women and six children died from the attack.

Haylee Wood died from a combined overdose of Fentanyl, heroin and methamphetamine.

Questions on the safety of residents have sprung up now that convicted felons who once committed and were convicted of crimes, regardless of its severity, are back on the streets of New Jersey.

Five students were airlifted, while two were taken by an ambulance.

Xin Yu knew that his wife Min Ai was seeing another man.

Robert Ketner died in the hospital three days after sustaining a head injury from an altercation with River Baumann last week.

The man shot his wife twice in the head before turning the gun on him and shot himself in the chest.

Kansas Man Who “Had Dealings” With Authorities Arrested For Killing Sons, Abducting Daughters

Donny Jackson was arrested near Erick after Amber Alerts were raised for the disappearance of his daughters.

Emma Webb told her daughter she wouldn’t go to her show if “she didn’t slow down.”

Caitlyn Pye plotted to attack a predominantly Black church in 2019.

The Third Wave: COVID-19 Infects All Residents Of Nursing Home In Kansas

The outbreak happened at the Andbe Home earlier this week.

24-year-old Jhamal Gonsalves was allegedly struck by a police cruiser while riding his moped.

Madison said she has been voting in every election for the last 72 years.

Quarantine Works, But Should Be Done Correctly, Says WHO

As the U.S. faces a new outbreak, the Centers for Disease Control and Prevention recommends a 14-day stay-at-home period to curb COVID-19's spread.

One man was reportedly wearing a black ski mask and the other was waving what appeared to be a gun.

Trick-Or-Treat: 'Treehouse Of Horror XXXI' Comes With A Political Twist

Homer was bombarded by a list of the things President Trump did in the past four years.

Woman 'Panicked,' Tosses Newborn Out Of Window But Able To Clean Bathroom

Dookram showered and went to sleep after the incident. 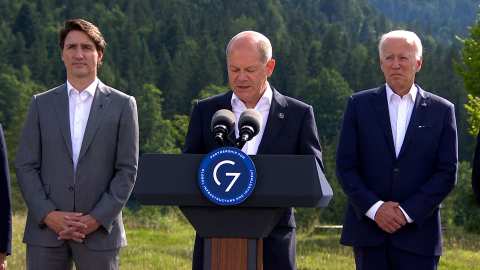 Firefighters and soldiers searched for survivors in the rubble of a shopping mall in central Ukraine on Tuesday after a Russian missile strike killed at least 16 people in an attack condemned by...

'It Was Hell', Survivors Say Of Russian Missile Strike On Busy Mall In Ukraine

In a central Ukrainian intensive-care ward, five people are crammed into a room, their wounds bound up in bloodied bandages.

Putin Is Secretly Ill, Only Has 2 Years To Live: Reports

Louisiana will continue to allow abortions in the state after being on the abortion ban trigger law list.

Dozens Of Migrants Found Dead In Truck In San Antonio